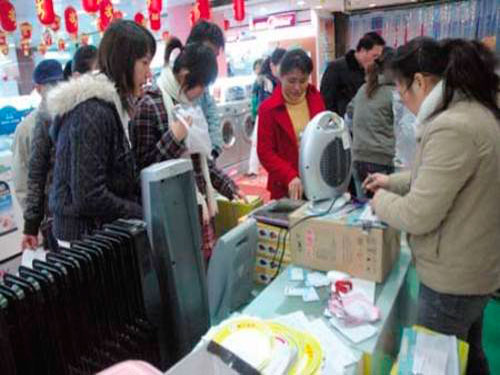 With the drop in temperature, electric heaters, soya-bean milk makers, induction cookers, and Yuba have become the new darlings of the market. However, some counterfeit household appliances under the name of "brand names" have also taken the opportunity to debut. Consumers will not recognize them carefully. Really may be deceived. Industry sources remind consumers that these so-called â€œbig moneyâ€ home appliances are basically counterfeit goods, and not only the product quality is not guaranteed, but its after-sales service is also difficult to guarantee.

Small Appliances â€œå‚å¤§å‚â€ çŒ–ç— Recently, our provinceâ€™s industrial and commercial departments seized the small home appliance gifts placed in a bank in Weinan City. According to business and industry officials, these small household electrical appliances known as the â€œbeautifulâ€ brand were suspected of counterfeiting. The logo can be seen on the outer packaging of the trademark. The conclusion was confirmed by regular factory sales outlet service personnel. It is reported that in some home appliance wholesale markets in Xi'an, such as the United States is still very common in this situation, "dumpsters" phenomenon in the appliance industry, especially the small household appliances industry is particularly serious. In addition to the United States in the market, the nine well-known small household electrical appliances brand, such as nine Yang, Op, Supor, etc., have repeatedly fake copy of the "cottage version" of the product, and some genuine and fake product packaging is almost exactly the same, only the trademark or origin, etc. slightly With a little bit of difference, it is hard for consumers to find out if they do not look closely.

â€œDo you need 'True Jiuyang' or 'false Jiuyang'?â€ Wang Xiaomei, head of Shandong Jiuyang Company in Shaanxi, revealed to reporters that some dealers in Xiâ€™an actually openly sell these â€œbig moneyâ€ small household appliances, which can be seen in the market. "Shanghai Joyoung", "Shenzhen Joyoung" and so on, she said angrily: "Every year due to the counterfeiting cause, Shandong Jiuyang Shaanxi Company suffered economic losses of up to one million yuan."

Aopu Shaanxi dealer Wang Jun also reported to reporters that there are often counterfeit bath products on the market. There are also called â€œShanghai Opsâ€ and â€œOpp Hong Kongâ€, which brings great economic losses to the company. Affected the company's brand image.

Counterfeit product service is difficult to safeguard Industry insiders believe that due to the relatively low market price of small household appliances, taking soybean milk machine as an example, the regular manufacturers of soya-bean milk makers generally have a market price of between 300 and 500 yuan, and counterfeit household appliances market. The price is between 200 and 300 yuan. Many consumers have the idea that even if they buy counterfeit goods, they will not lose much in the economy. In addition, the "brand name effect" makes buyers or givers Psychologically satisfied. The phenomenon of â€œbig moneyâ€ is very prominent in small home appliances, especially seasonal products.

The phenomenon of â€œbig moneyâ€ has spread, not only damaging the legitimate rights and interests of manufacturers, but also damaging the legitimate rights and interests of consumers. Products produced by regular manufacturers are guaranteed both in terms of product quality and after-sales service. For example, plastic odors used in non-formal counterfeit products are usually large, power consumption is also high, product safety is poor, and it is prone to failure. Leakage, fire and other issues. The relevant persons of Jiuyang, Aopu and other manufacturers all told reporters that although they have repeatedly organized frauds on an annual basis, they have had little success. Because of market interest, there are still distributors selling counterfeit products in the market.

Shandong Xiaoyang, the person in charge of Shandong Jiuyang Company, reminds consumers that it is difficult for ordinary consumers to identify genuine and fake brand-name products. The best way is to go to regular malls to buy and ask for invoices. Secondly, it cannot be too cheap and cheap because brand-name home appliances are mostly priced. If the prices of products purchased by the country are very different from the market prices, we must be careful, and it is recommended that consumers do not purchase them. Of course, some experienced consumers can also inspect products from their trademarks, origins, and certificates. At the same time, she appealed that the industrial and commercial departments should increase supervision to purify the home appliance market and also provide consumers with a comfortable, safe and satisfying consumption environment.
Home
Recent posts
Archives