The LED lighting industry is picking up

With the increasingly perfect policy environment at home and abroad, the current overall development of the LED industry is showing rapid development, and the development environment is becoming more and more perfect. Internationally, countries are implementing system deployment of semiconductor lighting based on national strategies, and the policy environment is increasingly optimized, such as incandescent lamp bans, financial subsidy policies for demonstration projects, promotion of efficient LED lighting detection methods, and formulation of relevant standards to seize the standard voice Wait. At the end of last year, the European Union had completely banned the sale of incandescent lamps.

Domestically, with the State Council arranging 2.2 billion yuan to support the promotion of energy-saving lamps and LED lamps, the release of incandescent lamp roadmaps, and the promotion of tenders for financial subsidies for semiconductor lighting products, China â€™s relevant policies have gradually tilted toward the application side. Especially in January this year, six ministries and commissions jointly promulgated the "Semiconductor Lighting Energy Conservation Industry Plan", which clarified the development goals, main tasks and key projects of China's semiconductor lighting industry during the "12th Five-Year Plan" period, which promoted the health of China's semiconductor lighting industry. Order development.

According to the statistics of the National Semiconductor Lighting Engineering Research and Development and Industry Alliance (CSA), China's entire industry has achieved continuous growth. In 2012, the entire output value reached 1920 billion yuan, an increase of 23% over 2011. Judging from the situation in the first half of 2013, the industry's recovery trend is more obvious. The overall output value increased by 25% year-on-year. The output of LED devices also increased by 46.7% year-on-year. Lighting applications have grown rapidly. The 2012 output value reached 42 billion yuan (see figure). 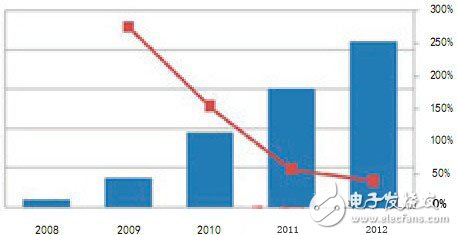 In addition, the performance of LED listed companies is also very eye-catching. After experiencing a brief decline in the first half of 2012, operating income has rebounded by more than 25% since the third quarter of 2012. In the first quarter of 2013, the revenue of 19 LED listed companies increased by more than 20% year-on-year; but at the same time, the profit margin decreased, and the total profit fell by 18% year-on-year.

At the same time, in terms of lighting applications, China has become a global manufacturing base for lighting products, the output of the lighting market continues to maintain a growth rate of about 20%, and the benefits of incandescent lamps being replaced gradually appear. From the industry data, it can be clearly seen that the output of incandescent lamps has gradually decreased, and the manufacturing capacity and output of LED lighting products in other energy-saving lighting fixtures are increasing. LED lighting products have shifted from a typical export-oriented market to taking into account both internal and external exports. Despite continued growth, the export ratio has begun to decrease, and many export-oriented companies have targeted the domestic market.

In addition, the current LED lighting market is still fiercely competitive, and companies are more dispersed. From the perspective of CSA statistics, the concentration of companies is only about 15%. And since last year, prices have been declining. From April to June 2013, the average price has dropped by about 25%. From the perspective of investment, it is gradually becoming rational. From July 2012 to June 2013, the investment amount that has been clearly established has reached 14.6 billion yuan. The investment in the LED industry in the first half of 2013 increased by 57% compared with the second half of 2012. From the perspective of investment, from the upstream to the downstream and supporting facilities, downstream applications account for more than 40%, and industrial supporting facilities account for more than 30%. From the perspective of the regional distribution of investment, Jiangsu has the largest proportion, accounting for more than 40%. In addition, the trend of integrated mergers and acquisitions is intensifying, involving the upper, middle and lower reaches, and the three sides of the two sides of the strait, which shows that advantageous resources are gradually gathering to industry giants.

At present, the overall penetration rate of LED lighting products in the market is relatively low, only 3% in 2012. In the early stage, the demonstration project drove the transformation of the municipal system into the main market for lighting applications, focusing on public lighting fields such as roads, tunnels, squares, and subways. Commercial and industrial lighting became fast-growing subdivision application fields with good economy. Lamps accounted for 34%, and LED lighting accounted for 66%.

With the continuous improvement of LED lighting's mainstream position in the global lighting market, LED lighting market share will rise substantially. In recent years, the continuous increase in construction area of â€‹â€‹industrial plants and other areas has gradually enlarged the demand for LED lighting applications. The McKinsey report pointed out that in 2016, the penetration rate of industrial lighting will reach 18%, and it will exceed 30% in 2020. China's industrial electricity consumption has always accounted for more than 70% of the entire society's electricity consumption. The demand for industrial energy saving is strong. The huge market space also makes China's LED industrial lighting penetration rate expected to further accelerate.

From the perspective of lighting applications, semiconductor lighting will transition from commercial and industrial applications to the civilian market. In 2013 and the next two years, commercial, industrial, and public lighting applications will remain the mainstream market. It takes time. From the technical level, light efficiency improvement and cost reduction have become a dual driver of the lighting market. According to the US DOE prediction, in 2015, the cold white light device's light efficiency will reach 190lm / W, an increase of 27% compared with 2012, and the price will be 2 $ / klm, which is a 67% decrease from 2012, while the warm white light device's light efficiency reaches 162lm / W, an increase of 43% from 2012, and the price will be 2.3 $ / klm, a decrease of 70% from 2012. From the perspective of innovation, innovations such as technology, products, applications, and business models will go hand in hand. Going beyond lighting will have attractive prospects in the future, and will create a new era in which optoelectronics and microelectronics go hand in hand. From the perspective of China's situation, the rapid growth of LED lighting is beginning to show signs. With the overall recovery of the lighting market in 2013, the growth rate has stopped falling, and the penetration of the lighting market may accelerate. CSA predicts that in 2015, the overall LED penetration rate will exceed 30%.

SCOTECH manufactures a full range of oil immersed power transformers including generator step up transformer, substation step down transformer, mobile Substation Transformer and other different types, our maximum capacity and voltage is up to 300MVA 330KV, with the advanced design and thorough quality management system, we had become one of the most reliable Power Transformer manufacturers in China. we do not compromise on the quality, we ensure that each one of our delivered units has passed the most strictly testing and that makes us confidently to provide the longest quality warranty to our customers. We export our power transformers to all major global markets.