Bold transformation of the back electrode of the component 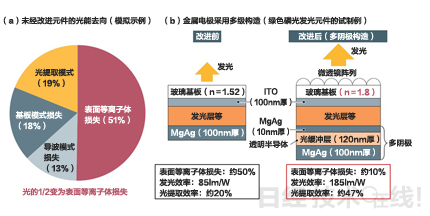 Figure 7: Increase the luminous efficiency by more than 2 times by controlling surface plasmon

According to Professor Kanazawa of the Kanazawa Institute of Technology, about 50% of the light generated inside the organic EL element without improvement in light extraction disappears with surface plasmon loss. The third class has found a method of using a multi-stage structure such as a thin electrode and a reflective layer for the metal electrode, which can greatly reduce the surface plasma loss, thereby improving the luminous efficiency. (The picture is produced by Nikkei Electronics based on the data on Sansho)

Sanshang believes that actively trying to suppress this (surface plasma) loss helps to further improve the light extraction efficiency, thus boldly changing the structure of the cathode. This is the "multi-cathode construction." The green light-emitting organic EL device which has both the structure and the surface light extraction layer of the prototype has a surface plasmon loss which is greatly reduced from about 50% to about 10%, and the luminous efficiency is improved from 85 lm/W to more than twice the 185 lm/ W. The light extraction efficiency is about 47%, which is a very high value as a thin component.

Various manufacturers have also begun to take measures against the cathode of the component. For example, Toshiba released a component with a luminous efficiency of 91 lm/W at SID 2012, and no special light extraction layer was provided on the front side of the component. Instead, the cathode material is replaced by the original aluminum (Al) into other high reflectivity materials. "It does not mean that the improvement of efficiency depends entirely on the reflectivity, and the reduction of surface plasma loss may also play a role" (Toshiba).

The future of blue materials is also brighter. 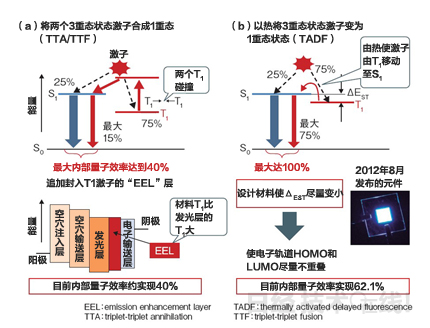 The figure shows two techniques that go beyond the limits of the fluorescent material with a previous exciton utilization efficiency of 25%. TTA/TTF changes the energy of two exciton collisions in the triplet state (T1) to become a one-state state (S1), and the excitons may emit light (a). TADF is likely to emit light by moving the excitons of T1 toward S1 by heat. (Figure (a) is produced by Nikkei Electronics based on data produced by Idemitsu Kosan, and (b) by Nikkei Electronics based on data from Anda Research Laboratory. (b) Photography: Anda Research Laboratory)

However, the new material is actually a fluorescent material. The difference from the past is that it has a mechanism for using the energy that has been previously lost in the form of heat or the like for fluorescent light emission. There are two main mechanisms for this mechanism.

One is the "thermally active delayed fluorescence (TADF)" discovered by the research and development team at Kyodo University's Anda (Fig. 8). In principle, the material's internal luminous efficiency can be achieved by 100%. Up to now, 62% has been confirmed. Recently developed a dark blue TADF material called "pure blue" (Anda Research Laboratory).

The other is the phenomenon of "3 heavy-state-3 heavy-state elimination" (TTA) or "3-fold-state-3 heavy state fusion" (TTF), which is being developed in the fluorescent materials, which is being developed by Idemitsu Kosan and Sumitomo Chemical. Mechanism (Figure 8) Note 5). However, in theory, the internal luminous efficiency of the material is only 40% at most, which is far from the TADF with an internal luminous efficiency of 100%. Idemitsu Kosan has developed TTF materials with efficiencies close to the theoretical limit, but said that â€œit will not be bound by theory and will continue to be developed for further efficiencyâ€ (Xiong, researcher at the Electronic Materials Development Center of the company's Electronic Materials Division).

Note 5) Idemitsu Kogyo is called TTF, and Sumitomo Chemical is called TTA. The same phenomenon has two names because TTA is a factor that causes a decrease in luminous efficiency when a current density is increased in a phosphorescent material. In the fluorescent material, it is a factor that improves the luminous efficiency. Therefore, Idemitsu Co., Ltd. believes that "fusion is more appropriate than annihilation", so it is named TTF.

In addition to improving light extraction efficiency and luminescent materials, organic EL illumination technology also has a series of technologies aimed at improving luminous efficiency and color rendering index. For example, in terms of technological innovations such as component construction and manufacturing methods, the creativity of various manufacturers is an eye-catching field.

It is said that the "lighting unit is made up of 10 layers" is the representative of the board of directors of the risk enterprise ASON TECHNOLOGY, Nakagawa Yuki (Fig. 1(f) and Fig. 9(a)). The company's dedicated director, Matsumoto Minami, is known for his work on the component structure "MPE (multiple photon emission)" in which the organic EL illumination unit is overlapped with the professor of Yamagata University. In the case that other companies began to adopt MPE technology in mass production panels, ASON TECHNOLOGY plans to use autonomous technology that further develops MPE as a weapon. In 2013, mass production of large-scale organic EL lighting panels began. (To be continued reporter: Nozawa Tetsuto, Nikkei Electronics)

Trait: The products are waterproof, shockproof;

Adervantages: Our products are saled with factory price, and the quality can guarantee, lastly we provide warranty for 1 year.