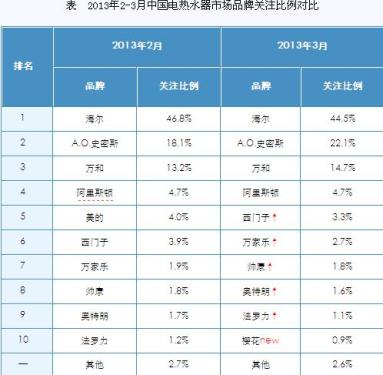 â€¢ Product Model Structure of Gas Water Heater Market: This month, Wanshou and JSQ20-10P10 have received the most attention from consumers.

â€¢ The price segment structure of the electric water heater market: The products within the thousand yuan are most concerned by consumers, with the proportion of attention reaching 25.8%.

(I) Electric water heater market â€¢ Haier continued to lead the electric water heater market In March 2013, there was little change in the pattern of brand awareness in China's electric water heater market. Haier, AO Smith and Wanhe maintained their top three positions, with a cumulative interest rate of 81.3%. Brand awareness is very concentrated. Among them, Haier's reelection brand watched this month's championship, with a focus on ratio of 44.5%, which was a 2.3% drop from February. The marketâ€™s attention to strengths is relatively stable. AO Smith and Wanhe maintained the position of runners-up and third runner-up respectively. The proportions of attention were 22.1% and 14.7%, respectively, which were slightly higher than the previous month.

In addition to the top three brands, the rest of the brands are all under 5.0%, and the market competition is fierce. The difference from last month is that Siemens, Macro, Shuaikang, Otlan and Faroese each rose one place this month. At the same time, Sakura is ranked tenth in brand watch, and the ratio is 0.9%.

(II) Gas Water Heater Market â€¢ Wanhe Reelected Gas Water Heater Market Champion In March 2013, in the Chinese gas water heater market, Wanhe continued to be the champion of the brand watch this month with a proportion of attention of 37.7%, and Wanjiale kept the second runner-up position unchanged. The proportion is 21.4%. The brands ranked third and fourth were Haier and AO Smith, respectively, and the proportions of attention were similar, with 12.4% and 12.2% respectively. The rest of the brand's attention ratio is below 10.0%.

It is noteworthy that this month's energy rate and Ariston's attention are both up one place, with a focus on 2.8% and 1.9% respectively. In addition, this month Fang Tai and Sakura Snow were among the top ten brands in the list, ranking ninth and tenth respectively.

Second, product attention to the pattern

2. Gas Water Heater Products â€¢ Gas Water Heater Market Wanhe and JSQ20-10P10 Most Concerned In March 2013, Wanhe and JSQ20-10P10 replaced Macrocar JSQ20-10JP as the champion of this monthâ€™s product watch list with a ratio of 8.8. %. This 20MJ / h rated thermal power, 10 liters / minute hot water yield of gas water heater products this month's price of 1899 yuan, unchanged from the previous month. It can be found that the top ten products that are concerned about the top ten are being taken over by Wanhe, Wanjiale and AO Smith. Among them, Wanhe and Wudu have exclusive five products, and the product has obvious advantages in terms of attention. 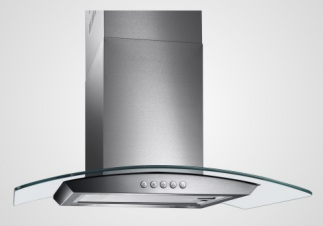