With the proliferation of automotive electronics, the number of in-vehicle security, entertainment, diagnostics, and ancillary electronic devices is increasing, and the interconnection requirements between devices are becoming more complex. At the same time, the in-car simulation system is also constantly moving to the digital system, including the camera in the ADAS (Advanced Driver Assistance System) from analog to digital, the Blu-ray in the car entertainment system, the demand for high-definition display, etc. The bandwidth of the system poses a big challenge, and a large amount of data requires more bandwidth to transmit.

On the other hand, for automakers, they want the in-vehicle interconnection network system to be open and scalable, to support multiple systems and devices, and to have the ability to integrate so that when new applications and devices are introduced It's easy to add to the system. Of course, the increase in more and more equipment has also led to an increase in the number of interconnected cables in the car, and the cost has also increased. Automakers also want to find lower cost interconnection solutions while meeting the stringent technical requirements of the car, ensuring connection reliability and stability.

Broadcom's innovative BroadR-Reach automotive interconnect solution meets the needs of automotive manufacturers. This is the industry's first automotive Ethernet interconnect solution since the company's first entry into the automotive market, which uses a single pair of unshielded twisted pair cables and standard Ethernet PHY components to form an in-vehicle Ethernet interconnect network. A full-duplex data transmission at 100 Mbps is achieved, and a standard MII interface is used for the connection between the PHY and the upper MAC. In addition to transmitting data, the interconnection network also supports the POE function, that is, the twisted pair cable can also supply power to the connection terminal while transmitting data, thereby eliminating the external power supply of the terminal and reducing the complexity of the power supply.

The BroadR-Reach interconnect solution has significant advantages over traditional LVDS technology. In order to meet the strict requirements of electromagnetic radiation and temperature of automobiles, LVDS cables need to have a thick shielding layer, and the connectors are also large and complicated. The single-pair unshielded twisted pair cable used in the BroadR-Reach solution not only achieves the same function but also reduces the interconnection cost compared to the LVDS cable.

The BroadR-Reach automotive Ethernet product line includes five chips. Two of them are Ethernet PHY chips, and the other three are highly integrated switching chips embedded in the PHY. The application of the switching chip BCM89500 and BCM89501 is mainly to interconnect a plurality of terminals in the automobile network, and the switching chip BCM89200 is mainly used to interconnect a plurality of ECUs in the automobile. The PHY chip BCM89610 is used for the in-vehicle diagnostic system when the car is turned off, while the BCM89810, which is also the PHY chip, is for the interconnection application between various devices in the car. 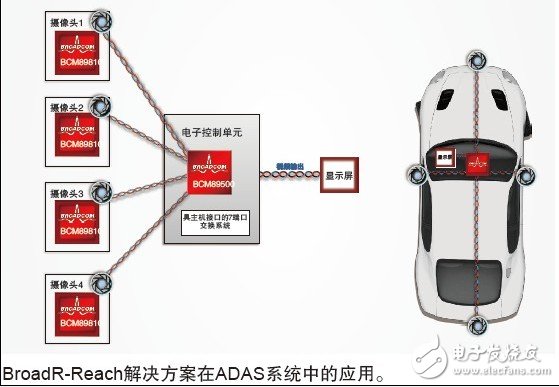 As can be seen from the application diagram of the BroadR-Reach solution in the ADAS system, the camera with the PHY transmits video and other data information to the switching chip through a single pair of twisted pairs, and the switching chip aggregates the information collected by each channel to Together, the CPU in the electronic control unit performs certain processing such as codec processing, and then outputs the video to the display.

In the application of in-vehicle infotainment system, the current mainstream MOST technology connection method is to connect multiple devices in a ring-shaped manner, and the maximum rate of sharing between devices is 150 Mbps. When a device occupies a large bandwidth, other The device may have no bandwidth resources available. Compared with MOST, the standard Ethernet BroadR-Reach technology provides dedicated 100Mbps bandwidth for each device, and the uplink rate can even reach 1Gbps. At the same time, it also has link aggregation function, for example, two different 100M physical chains. The convergence of the channels can be seen as a two-hundred-megabit link, which can simply scale the bandwidth linearly by the number of links, providing a fast bandwidth increase for devices that use large bandwidth. This kind of link aggregation can also provide redundancy protection. When a link fails, it can be quickly transferred to another link to ensure the smooth transmission of data.