The network virtualization process is unstoppable

Virtualization technology shifts the business value of network services from the services provided by dedicated hardware devices to the services provided by software. Internet companies are the beneficiaries of virtualization technology. Their business development and operations have gone from the physical servers that rent traditional IDC data centers to the IaaS (Infrastructure as a Service) that is virtualized in computing, storage, and DC intranets. stage. Further, it will evolve to the PaaS (Platform as a Service) phase of integrated development and operation. At this time, business iterations and online speeds will be faster, and the ecosystem of integration partners will be stronger.

Traditional operators currently operate voice, IPTV, high-speed Internet, and enterprise VPN services through private APIs (application programming interfaces) or network management interfaces provided by dedicated devices; their own IT systems, such as B/OSS, are mostly It is also running on the physical server of IDC with a low degree of intensification.

The needs of end users are changeable and personalized, and Internet companies have introduced a large number of connections into the cloud with the lead in virtualization, and these connections have created value for Internet companies. The value of the carrier's proprietary voice and IPTV services is weakened by the OTT business. Carrier pipeline traffic and connections grew rapidly, but revenue did not increase significantly. 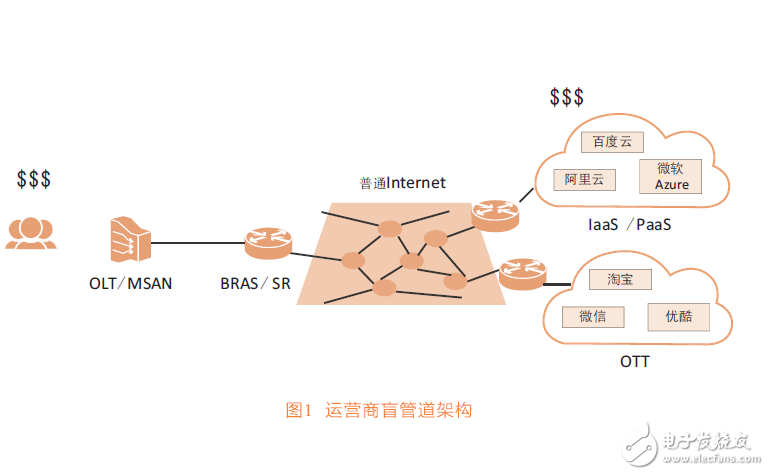 In the face of challenges, operators have two choices, either as a simple blind pipe or as an intelligent pipeline that moves on demand. The blind pipe architecture is shown in Figure 1. The operator can only get the income of the universal Internet connection. In a blind pipeline, operators cannot predict changes in user experience requirements and cannot meet the needs of network on-demand customization. For example, most of the time, the â€œbest effortâ€ pipeline can meet the needs of Internet access, but occasionally when turning to video sites, Need to increase bandwidth; most of the time video sites push videos to users through unicast, but in some major events, customizing a multicast network can ensure the user experience. 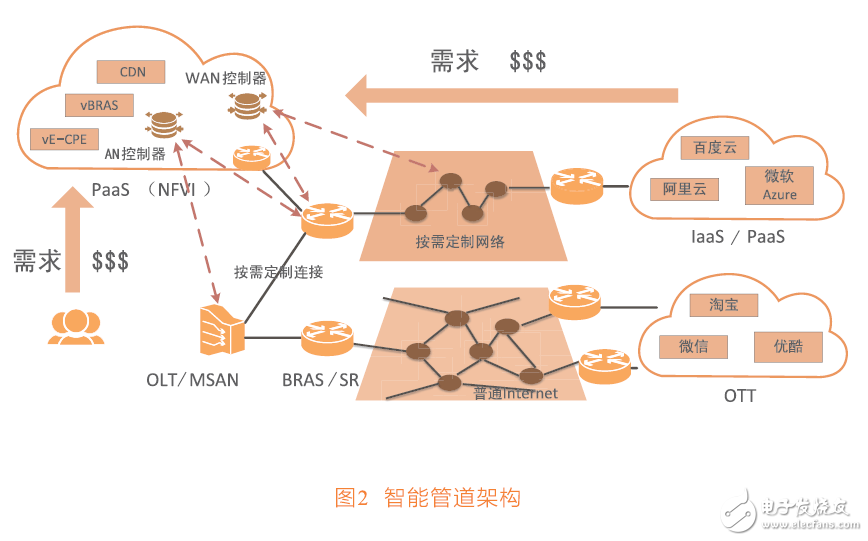 The intelligent pipeline architecture is shown in Figure 2. To gain more value, operators need to build a fast-paced network with PaaS as the core to meet the challenge. The current mainstream infrastructure operators have accepted the NFV network function virtualization concept proposed by ETSI, and plan to build a clouded data center as NFVI (NFV infrastructure). The data center based on the PaaS platform can be analogized to the service area along the expressway. Based on this, the operator can provide differentiated services for various traffic at any time.

Internet companies and end users do not own the actual WAN physical network, and usually only use the Internet that provides universal service as a connection. If operators establish the ability to network virtualization, when valuable connections are about to take place, users and Internet companies can propose network customization requirements to operators, obtain shorter delays than Internet connections, or have more bandwidth and cost. Low one-to-many connection.

SDN technology helps in the implementation of virtualization. The control and forwarding separation of the SDN technology helps the software function to be separated from the dedicated hardware. Even physical network resources distributed outside the data center can be mirrored in the virtualized software world for use by VNF through the SDN controller. This is different from the traditional VPN private network. A traditional VPN cannot provide a virtualized image for itself, and does not provide a global network view for upper-layer applications. The network under SDN control can provide a global image of the network for upper-layer applications, allowing upper-layer applications to customize their own network connections.

The virtualization of the access network mainly includes two aspects: network virtualization and network function virtualization. Network virtualization: Implementing the slicing of the access network, each slice is a customized virtual network: it can be a pre-configured network with a long life cycle, such as a virtual access network that the basic operator wholesales to the virtual operator; It can also be a virtual network that is dynamically created and deleted according to user experience requirements. For example, when industrial control occurs, low latency and small bandwidth are required, and when VR occurs, low jitter and large bandwidth are required. Such network slices should be able to follow the changes in demand and quickly allocate matching network resources through the SDN controller. Through network slicing, the physical access network can be shared by multiple virtual access networks to achieve full utilization of resources without constructing an independent network for each usage scenario.

Network function virtualization: VNF, pure software function module, function development and verification does not depend on a dedicated hardware platform. The actual operation calculation and storage resources are taken from x86 and other virtualization platforms, and network resources can be taken from direct physics. Network connection, at this time, the traffic of the network needs to be imported into the function module; it can also be the image of the physical network obtained from the SDN, and the actual physical network is driven by the SDN, and the actual user traffic can pass through the VNF. 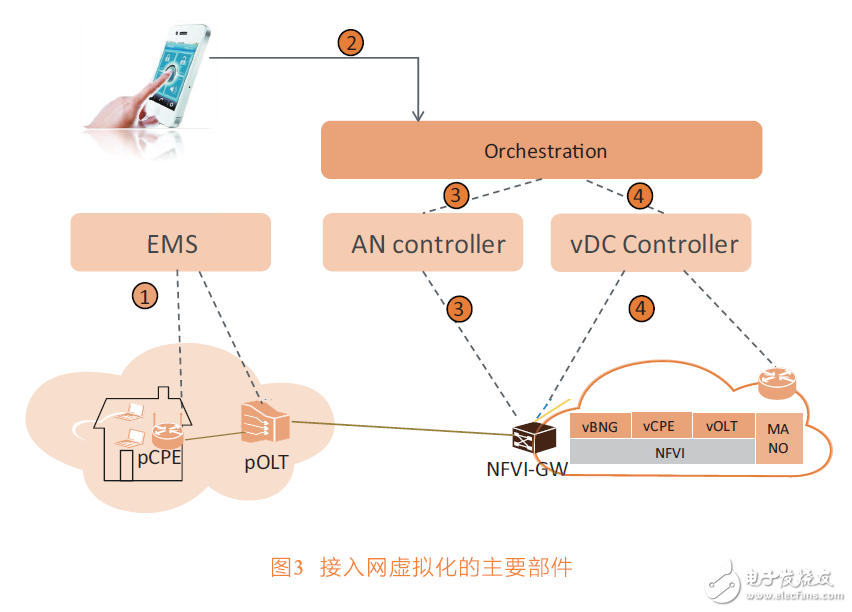 The VNF components of the network function virtualization include vOLT, vBNG, vCPE, etc., and separate the software functions of the control plane and the management plane from the original physical OLT, BNG, and CPE.

â—NFVI as an aid to traditional BNG

The IP session and user management are still completed by the BNG. The BNG offloads specific traffic in the IP session to the NFVI service chain to implement value-added services. Affected by the order of business processing, after the service chain such as vCPE is processed, it may need to reconnect to BNG from NFVI. Traditional BNG is not controlled by NFVI, so the traffic trend may be complicated.

The IP session and user management of the existing users or users who do not have the VNF service chain requirements are completed by the old BNG; the IP sessions and user management of the newly added users are completely imported into the NFVI, and the NFVI of this part of the users is completely controlled, such as vCPE and vBNG. The connections between the forwarding pools are controlled by the SDN controller.

With SDN and NFV technology, we are building a more agile, on-demand access network. The gradual maturity of data center technology is a large background for access network virtualization. The network's control and management functions can be virtualized by computing and storage resources without having to rely entirely on the limited capabilities of dedicated devices. SDN technology can help network virtualization scale out of the data center and out of the data center. Although more and more traffic will occur in east-west data centers or between data centers, a controlled access network is needed to distribute north-south traffic to data centers and traditional Internet as needed. Flexible use of various business software.

Safety is always a primary consideration when designing a solar system, but it becomes even more important when your system is on a boat far from shore, or an RV on a remote road. Different battery chemistries have different risk factors. Obviously, abusing any type of battery can create a dangerous situation. But with normal, and perhaps even a bit of rough treatment, the different batteries have different safety concerns that need to be addressed.